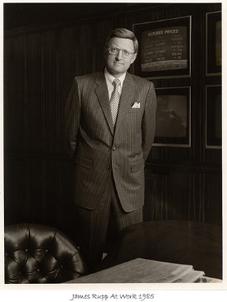 James M. Rupp, 83 years of age, of Minnetonka, MN & Naples FL passed away at his Birdsong home in the Minneapolis area on December 28th, 2018. Jim was a television & broadcasting industry pioneer who was born on November 7, 1935, in Pocatello, Idaho to Mahlon Earl & Ila Grace Rupp & was the eldest of four children. He graduated from Idaho State University in 1957 & received a Master’s degree in Radio & TV in 1959 at Ohio State University.

Jim began his career in broadcasting in 1959 at Arbitron in Maryland, one of the first TV/Radio ratings companies. He then rose to General Manager at Cox Communications, Broadcast Division, in Atlanta where he was responsible for managing all television & radio stations and opening up their New York office. In 1978 he met with Warren Buffett who helped him find his final role as President & CEO of Midwest Communications in Minneapolis. Under Jim’s leadership, WCCO TV & Radio won awards for the very best stations in the nation. Rupp initiated one of the first US satellite teleports through Midwest Cable & was a pioneer in Satellite Music Network. He served on the boards of King World Productions (distributor of Wheel of Fortune & Oprah), United Video, American Women in Radio & TV, Science Museum of Minnesota & First Trust Company of St Paul.

A Memorial Service was held on January, 19th, 2019 at Wayzata Country Club in Wayzata, MN.  Private interment in Naples, FL. A smaller memorial luncheon will be held in Naples, FL during the Spring of 2019. In lieu of flowers, memorials may be made to Mayo Clinic Foundation.